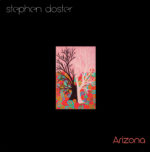 Stephen Doster is one of Austin music’s secret weapons, at least outside of Austin. Around here, it’s not such a secret. Not counting his collaboration records with Will Sexton and Bill Carter, Arizona is his first solo album, since Rosebud, his power pop chestnut from 1996. However, Arizona is an altogether different affair. Where Rosebud employed the rock muscle of chiming guitars as its principal brushstroke, “Arizona” offers a more diverse, subtle use of guitar sonics. Added musical color comes in the form of Kevin Lovejoy’s beautifully understated keyboard work, Brian Standifer’s recurring cello, and sprinkled in horns, ably supplied by Elias Haslanger and Ephraim Owens, two of Austin’s finest jazz players.

Arizona also delivers tighter song structures compared to the more rambling, guitar driven arrangements on Rosebud. Notwithstanding some definite Rosebud highlights, on the whole “Arizona” is a much more mature, disciplined song cycle, covering a variety of genre styles, including both classic and alternative rock, chamber pop, classic R&B and jazzy blues.

Doster, who produced Arizona himself, is a studio journeyman. To date, he has produced over 70 albums for a diverse roster of mostly Texas-based artists. His eclectic, producer experience qualifies him to self helm the diverse sonic palette that is Arizona. In less experienced hands, the result might have proved troubling. But, with Arizona, Doster has created a masterful song cycle that truly plays like my favorite classic albums by any artist you may care to mention. I have listened to this album many times, as many times or more than many of those favorite classics. The more I listen to Arizona, the more I like it. I have long since gone past the point of loving it.

From the classic rock sheen of the opening title track, “Arizona,” to the dirge-like, chamber pop closer “Into the Night,” Doster hits highlight after highlight across an album that will defy listener expectations. He proves his deft musical prowess from one song to the next, leaving the listener curious as to what’s coming next. The more you listen, you will find your favorite song will change over time. Right now, I am hooked on “Your Simple Mind,” which reminds me of Wilco when they are doing shiny pop songs. This song has radio single written all over itself and I dare you to not sing along. I am also partial to “Second Story Balcony” and have pressed replay on this track perhaps more than any other on the album.

Kicking off what would be side 2 of a vinyl issue (which this record deserves) the horn backed shuffle of “Enough for Everyone” reminds me of a great lost JJ Cale track fronted by Boz Scaggs. Following “Enough for Everyone” is “Baby, There’s No One Like You,” which is the only co-written track on “Arizona.” Doster wrote this with Chris Layton and Tommy Shannon, aka Double Trouble, for their star-studded album “Been A Long Time,” where it was sung by Dr. John with guitar accompaniment from Willie Nelson. I have heard both versions and with due props to Dr. John and Willie, I prefer Doster’s mystical interpretation much better.

In fact, it reminds me of Doster’s secret weapon throughout “Arizona”…his vocals, which are often overlooked because of his stellar guitar, songwriting and production skills. Every once in a while a record comes along that begs me to sing along and right now that record is Arizona. This is one for the ages.